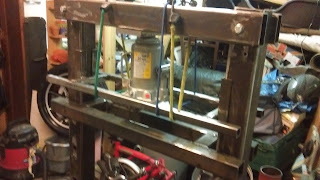 Nearly finished the press. Just waiting for the trampoline springs that I'll be using instead of bungies. 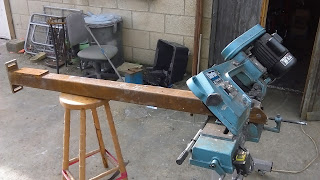 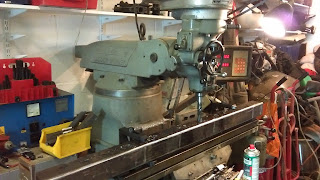 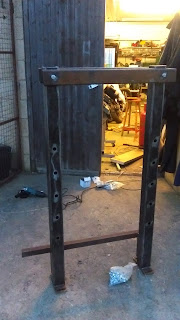 Getting there, need to make a way of holding the jack and the workpiece. Reckon a decent day in the shed will have it finished. 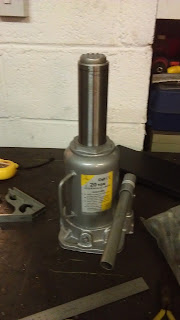 ...add some steel from the scrapyard 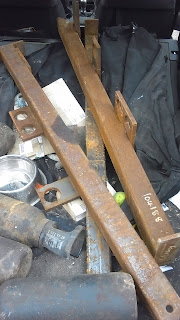 and you have the ingredients of a shop press.

First step was cutting the rectangular box section I will be using for the cross pieces in half.

Next step was to remove the bits of plate welded to the box sections that I will be using for the uprights. This killed my grinder. 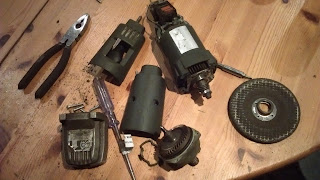 So I turned to drilling the holes in the cross pieces. 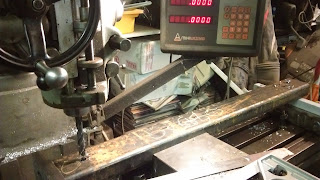 By doing this on the mill I know that they are exactly 650mm apart (+/- .01mm) this is possibly a bit of overkill. 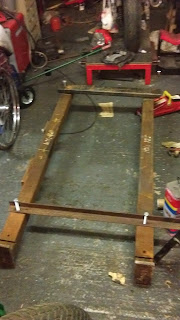 I reckon I've got enough scrap about the place to finish with little extra cost.
Posted by Chas at 14:12 No comments:

A black bag of swarf

....is what I cleared up from on, under and around my lathe. It now looks like this. 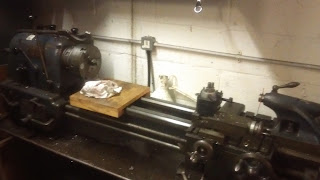 I think I need to get into the habit of clearing the lathe (and mill) down after every use.

Before heading home I slung the XR seat on the Sportster to see how it looked with the 19" wheel on the rear. 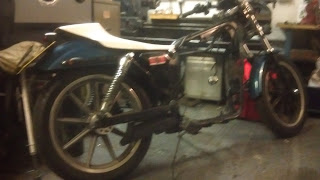 Obviously the rear mudguard needs to go but it looks like quite an east job to fit.

I machined the last of the spacers for my front to rear wheel conversion. 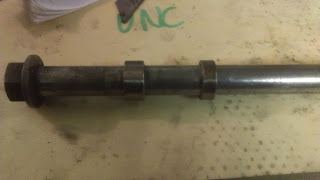 Everything seems to fit, I need to paint the wheel to match the front and fit the flattrack tyre. 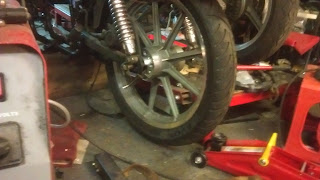 I fixed the tailstock on my lathe today. I drilled out the brass pins from the tailstock quill with a 6.5mm drill then used a 1/4" slot drill to make location holes in the ram nut. I then turned some brass down to a little over 1/4" for the replacement pins. 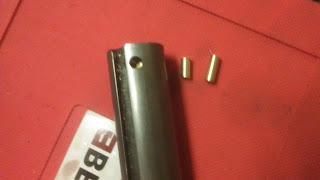 I then put some loctite bearing retaining compound on the sides of the holes (to accommodate the slightly oversize holes in the quill) and pressed the pins in place. This meant that once the loctite has set I could use the lathe to remove the excess on the locating pins. 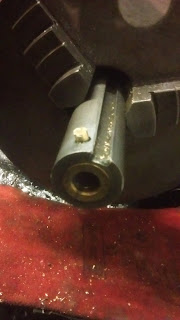 So I ended up using my lathe to fix my lathe.
Posted by Chas at 14:16 No comments:

I had planned to spend the weekend in the shed but work got in the way as a result I only got away late Sunday afternoon. I figured that a couple of hours was enough time to make up the spacers for the spacers fr my wheel conversion.
This is where I encountered my first problem, I was sure I had some 1" bar somewhere but couldn't find anything. I did have a length of 1.24" round bar, god knows where it came from but  figured it would be easy enough to turn down to 1". 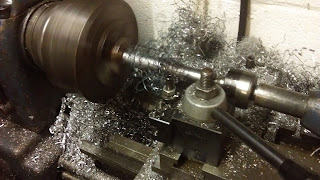 It didn't take too long but it seemed to machine differently from other steel I've machined, forming long spirals of swarf and judging from the colour generating quite al ot of heat in the process. I still managed to turn down about 6" down to 1", enough to make the largest spacer. Here it is awaiting the bandsaw. 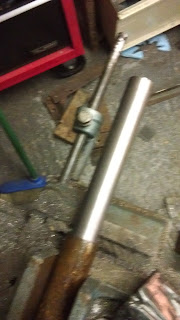 The next step was to drill it through so the 3/4" spindle could pass through it. I started with a 10mm drill, drilling a pilot from both ends. However due to the length of the work piece it didn't actually meet up in the middle. This may have been a mistake but I decided to go ahead with the next drill up I had, a 21/32" with a morse taper.

The picture below shows the work piece after drilling through from one end. Note the discolouration caused by the heat generated. 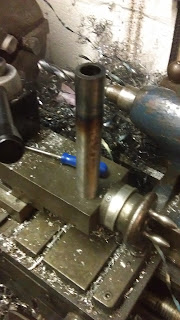 This heat along with the fact that the work piece was solid in the middle are what I think led to the following tale of woe.

In the picture below the drill is stuck solid in the work piece at one end and in the tailstock quill in the other. The chain of events that caused this started with drilling the large hole from the second end. I found that the drill seemed to cut best when driven in using the tailstock ram with quite a firm hand.

This produced a lot of heat but appeared to work, until the drill broke through the previously undrilled section in the centre into the hole I had drilled from the other end. At this point the drill jammed.

I tried various things to get the drill out of the workpiece but only managed to make things worse by jamming the tailstock quill onto the drill bit.

An attempt to force the drill out of the quill's taper with simple brute force succeeded only in shearing the pins that hold the quill to the ram nut. 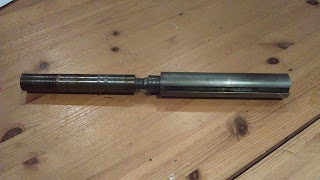 At this point I decided to stop with the brute force (i.e.BFO hammer) and use some more controlled force in the form of a press.

The press got the drill out of the quill which was a relief but I now need to fix the connection between the ram nut and quill before I have a functioning tailstock again. 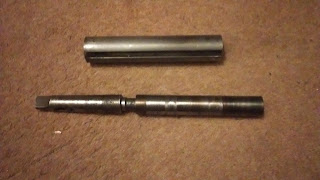 But I think I've learnt an important lesson about stopping and thinking before reaching for the hammer, especially because I now reckon that simply running the lathe in reverse would have released the drill bit when it first got jammed and avoid the grief my brute force resulted in.